Later on, she starred in a reality show called Keeping up with the Kardashians, which was about the personal and professional lives of Kardashian and Jenner family. She has two sisters, Kourtney and Khloe who are equally stylish as Kim herself. This television series happened to be the turning point in her life personally and professionally. There has been stopping her ever since. We wish you all the very best in future as well, dear lady. Also, we hope that you continue to be the fashion bomb that you are.

She was born on 21st of October 1980. Currently, she is married to Kayne west. They tied knot in 2014 and have on child. This is Kim’s third marriage.

Fashion experts are of an opinion that the lady’s wardrobe underwent a transformation after she gave birth to her daughter, North West. Since then, what is in her wardrobe had been nothing less than fabulous.

Kim kardashian rose to fame a few years back by virtue of a reality T.V series and has been in buzz ever since for good and well, not so good reasons alike!! Whatever be the reason, the lady has never failed to impress her fans with her perfect 10, hour-glass figure and her almost impeccable sense of styling and dressing. She also was a trend setter for facial contouring, a makeup rage in girls!!

In terms of fashion, she has done it all from Luxurious gowns to ultra short dresses. From long coats to crop tops. We just cannot deny her the title of the most stylish lass of 2014. She never turned up without getting properly dresses up, complete with her high heels and perfect makeup. Below, in the following compilation, we have brought to you a few of the most eye-catching and smart numbers that Kim Kardashian was seen flaunting at various events in the past year that witnessed Kim going through a remarkable wardrobe make over !! 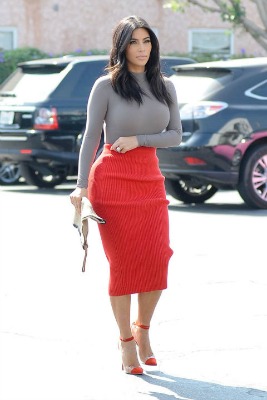 Skirts seem to be one of her favorite outfit. Last year, one of her most liked outfits was a Red wool skirt with tucked in Gray sweater. Not many ladies would try that out after giving birth to a baby, Kim Kardashian, however, got back in shape pretty soon after her delivery and wore this figure hugging Blood Red woolen skirt in Los Angeles. She paired it up with a light Gray sweater, tightly tucked into the skirt to accentuate her perfectly curvaceous body. The sweater had a snug fit and polo neck. She kept her hair hanging loose with a neat centre parting. Her footwear consisted of long heels in Red to match her skirt. She is 5 feet 2 inches in height and that is probably the reason that you would rarely find her without her heels. 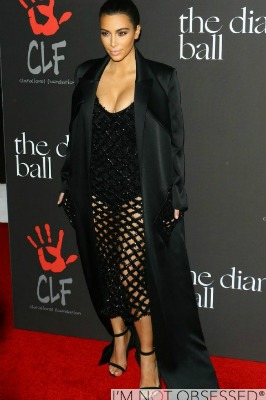 At the Diamond ball 2014 held at Beverly hills, kim Kardashian wore a dress that looked like a one piece made out of Criss Cross Black lace worn over a Black swimsuit. The coupled this one piece dress with a Black floor length over coat. To go with this outfit, her hair was tied in a high bun. The neckline of her dress was plunging allowing a sultry display of her cleavage. The girl follows, Have it!! Flaunt it!! pretty well. Black strappy sandals completed her look. 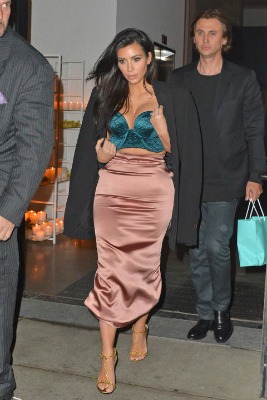 During her visit to the New York, she wore a Silken Blouse in Sea Green shade with a fitted Skin coloured Silken Skirt. She chose Golden sandals with her dress. The Blouse was off shoulders and the length of the Blouse allowed a portion of her waist to display. Her hair was casually side swept. 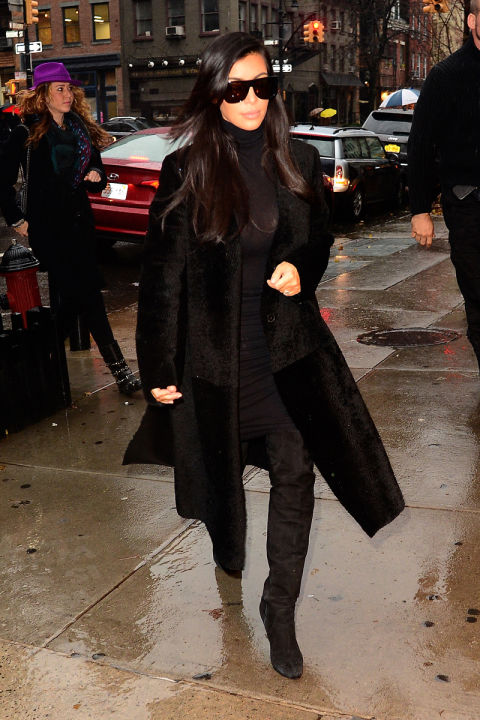 At another instance at The NYC soho,she was a vision when she turned up, dresses up entirely in Black yet again. This time she smartly paired Black trousers, top and overcoat. Black sun glasses and shoes completed her look. 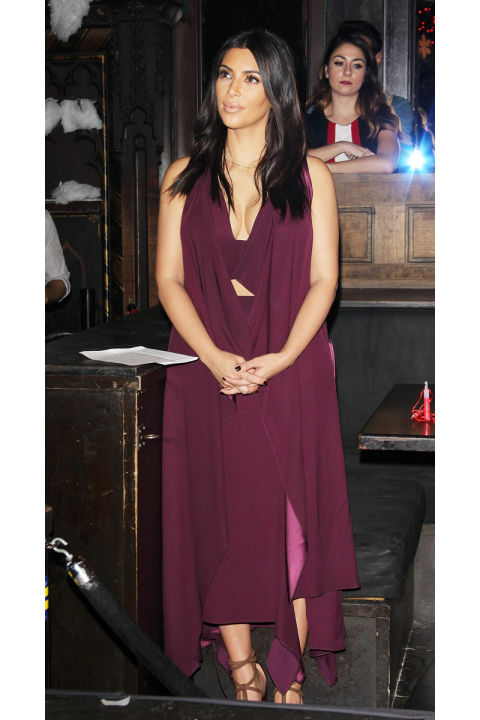 At the Elizabeth Taylor foundation on World AIDS day event held in west Hollywood, she dresses up in a Deep Wine coloured dress that had a falling neck line. The dress had a nice flow and different layers ended at different lengths. She coupled it with Light Brown, strappy wedges. 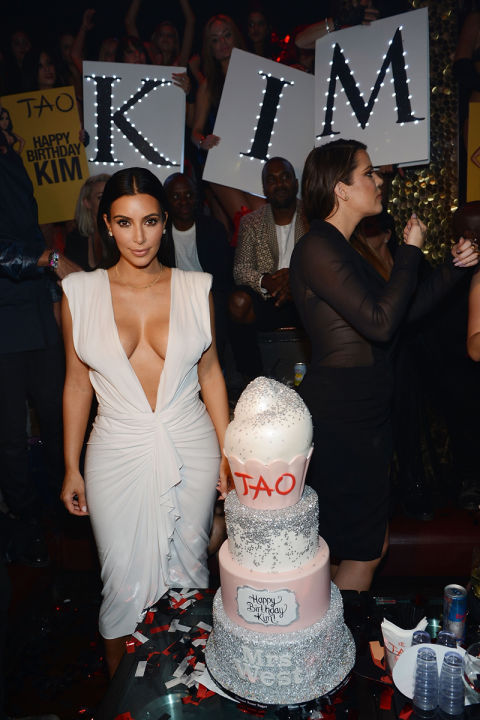 She celebrated her birthday in Las Vegas in TAO nightclub where she wore a White dress that had a deep as well as broad neck line. The neckline allowed an ample display of her front. This added a lot to the sex appeal to her outfit. We must add, she was a treat to the eyes and must have kept all the guys in the night club, drooling over her sexy outfit. 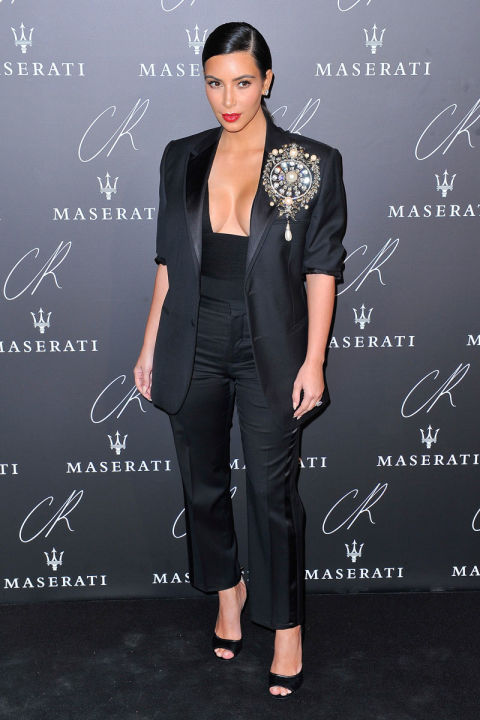 At the CR Fashion book vol 5, launch party she wore a court suit with a twist. The trouser length was kept up to the ankles. The overcoat had a heavy embellishment on one side and yet again her inner had a deep Neckline. No doubt, she has beautiful looking breasts which she knows how to flaunt in all her outfits. The makeup consisted of a fresh and neat base with a Red pout to glam up her outfit. Her hair was kept tidy with side parting. Not many ladies would dare doing this but then Kim has a lot of experience with experimenting with her outfits and could carry the entire formal yet extremely sexy avatar really well. 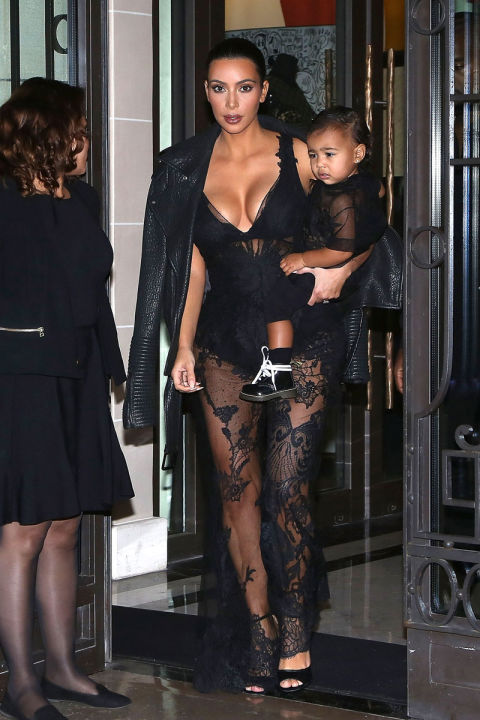 In Paris, While leaving her apartment with her baby, on one fine day in 2014, Kim showed up as sexy mommy!! She was carrying her baby. She wore a lacy, net outfit that showed off her legs through it. The neckline and fit of the outfit on the torso were very similar to a swim suit. Her makeup accentuated her facial features and the Maroon pout completely glorified outfit. Her hair was tied back tightly. She also sported a leather jacket hanging on one of her shoulders. 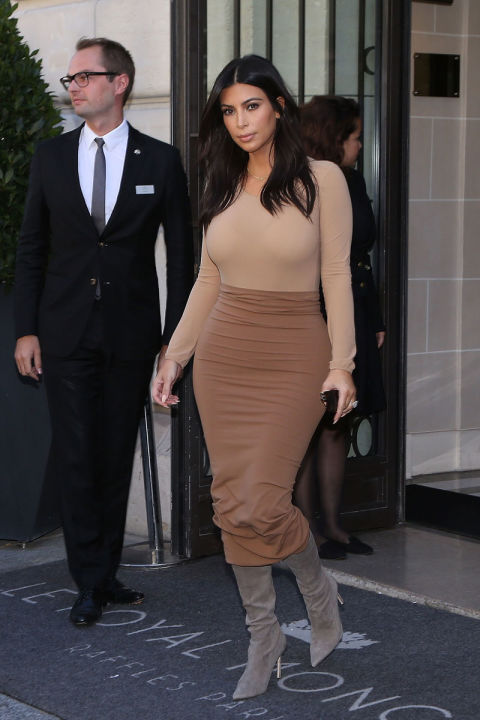 Once again, while she was out in Paris, she was found wearing a Chocolate brown coloured skirt that fit snugly. Her top was body hugging on fit. The top was skin in colour. Her boots were more or less knee-length in Gray suede leather. In this type of tight fit top and skirt pairing, Kim seems to be somewhat repetitive but equally glamorous. 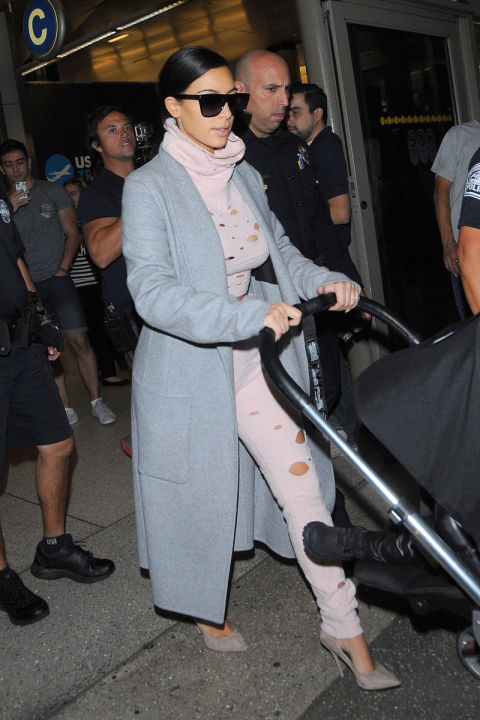 Yet again while the lovely lady was out in Los Angeles during the month of October,2014, Kim was seen by the paparazzi wearing a skin coloured tattered jumpsuit with a light gray colored long overcoat. The jumpsuit fit her really well and it being stylishly torn from just the right places added to the sex appeal of her outfit. 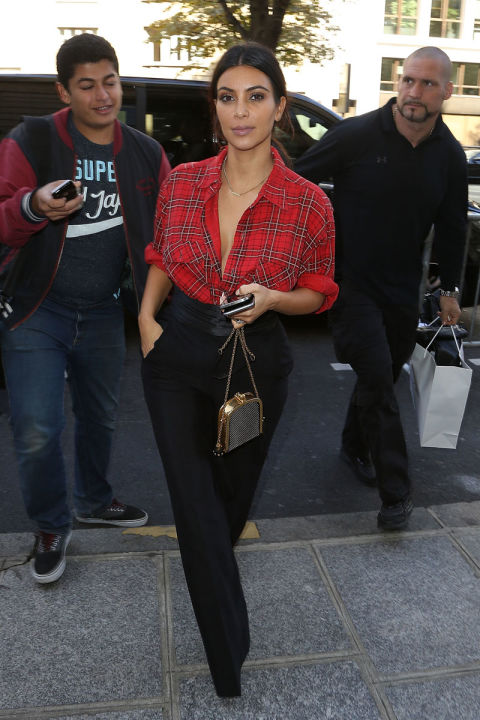 In the month of September while she was in Paris, Kim wore a Red check shirt tucked into her Black trousers. She chose to keep her shirt unbuttoned at the front for some skin show. She never fails to catch some eye balls. She wore a sleek necklace and carried a cute hand purse along. The trousers were almost floor length and we could barely make out what shoes was she wearing. 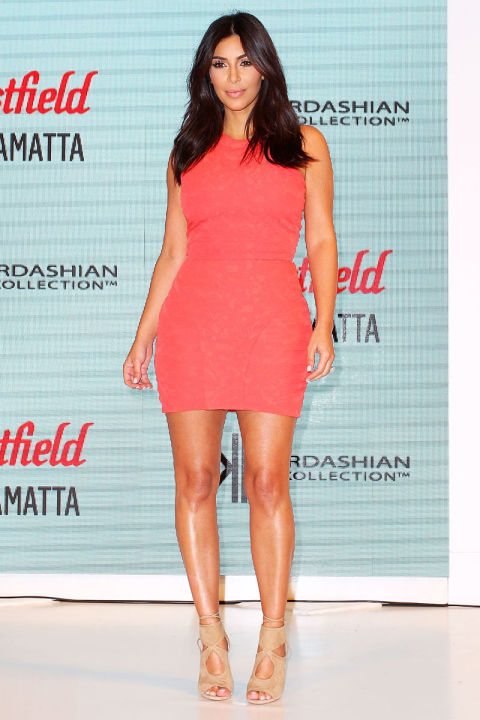 At the, Kardashian collection Spring Launch in Sydney during the month of September, Kim wore a short summer dress in Coral Pink colour. The dress had a round neck. Her eye makeup was done in subtle silver shade and her beautiful eye lashes, like always looked awesome. 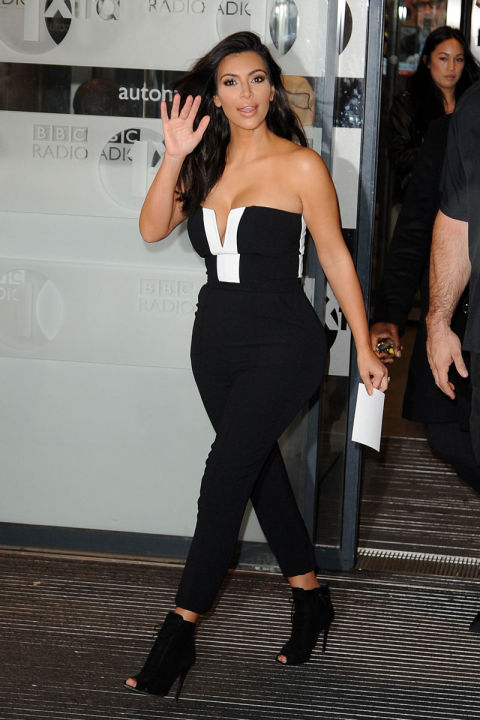 While Kim was at the BBC Radio 1 in London, She wore a Black trouser with a Black and White, off shoulders corset top with Black, peep toe heels. 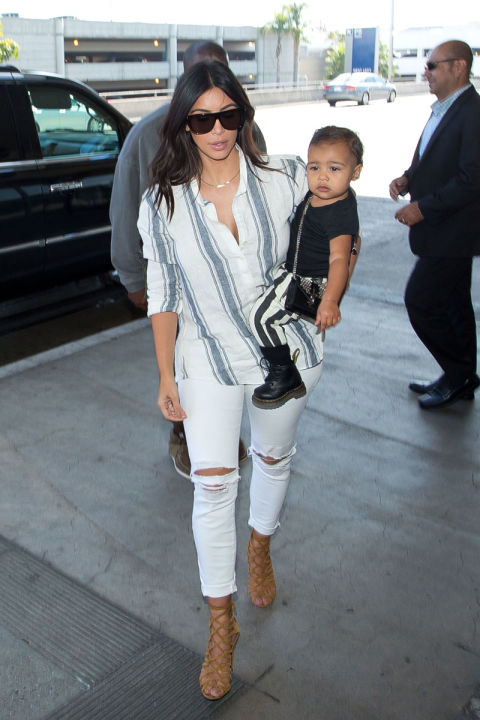 She turned up in a very cool and chick look in L.A with her baby North wearing a Casual striped shirt in white and Blue along with ankle length denims. Her denims were rugged and tattered from the knee area. Her sandals were in Brown colour. She also wore Sun shades along for that cool quotient. 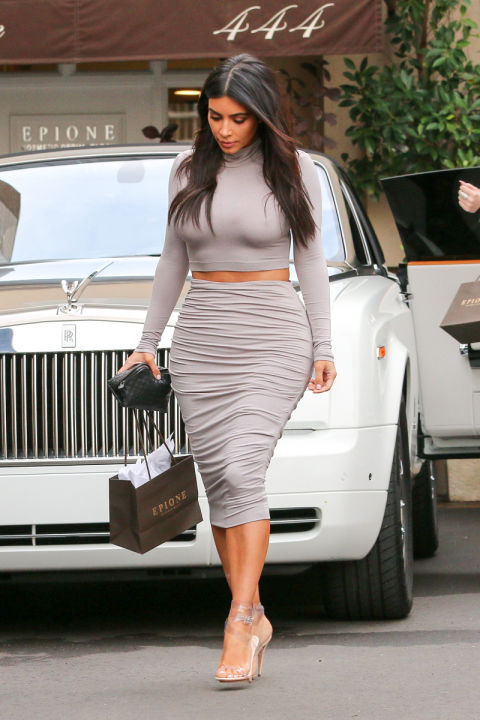 Now did you imagine something so casual could look so sexy. She wore a combination of Grey and Blue quarter sleeves T-shirt with a faded Blue denim. She wore nude coloured bellies along with her outfit. She tucked in her T-shirt from both the sides. Her here were also kept loose in an informal way.

So, I hope, it was fun for all you girls to swift through our short yet informative list of the top 15 looks Kim Kardashian was spotted in during 2014 and will be able to follow some, if not all her styles. To sum it all up, she does not fear experiments and can practically carry everything from casual tees to sexy swimsuits. As they say, if you are comfortable in your own skin, there is nothing you cannot wear which seems to be exactly the case with haute Mrs. Kim kardashian West.